Read Odessa: Genius and Death in a City of Dreams Online

Odessa: Genius and Death in a City of Dreams 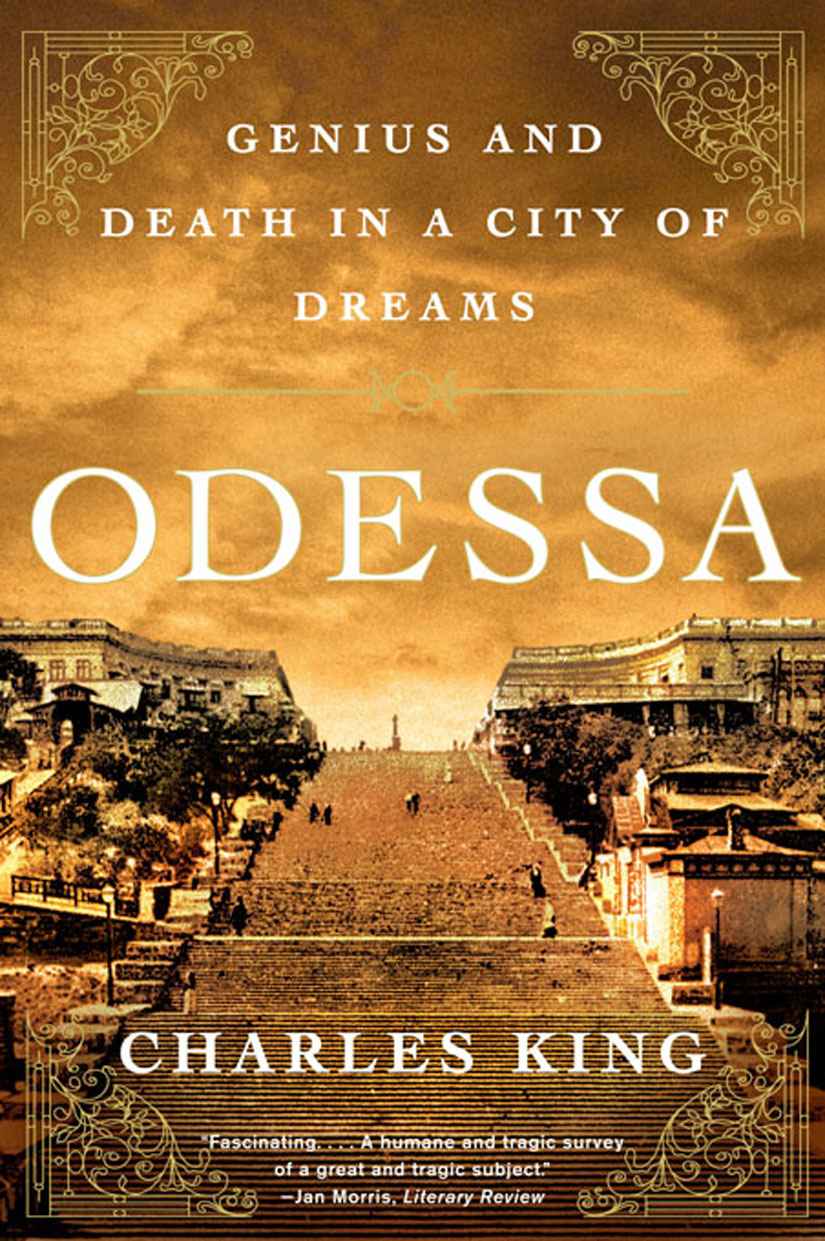 Extreme Politics: Nationalism, Violence, and the End of Eastern Europe

The Ghost of Freedom: A History of the Caucasus

The Black Sea: A History

The Moldovans: Romania, Russia, and the Politics of Culture

Genius and Death in a City of Dreams

For the Martens family:

and to the memory of Eldon, Marie, and Leland,

whose ancestors, with bravery and hope,

left the Russian plains for the American prairie

[A] great city is a kind of labyrinth within which at every moment of the day the most hidden wishes of every human being are performed by people who devote their whole existences to doing this and nothing else.

Odessa knew what it meant to bloom. It now knows what it means to wither—a poetic fading, a little lighthearted and totally powerless.

Have respect unto the covenant: for the dark places of the earth are full of the habitations of cruelty.

CHAPTER
2:
Potemkin and the Mercenaries

CHAPTER
4:
The Governor and the Poet

CHAPTER
5:
“There Is Nothing National about Odessa”

The Habitations of Cruelty

CHAPTER
9:
The Fields of Transnistria

CHAPTER
10:
“I Would Like to Bring to Your Attention the Following”

Odes, Odesa, or Odessa? The city has been known by many names in Yiddish, Ukrainian, Russian, and other languages. Today mapmakers often prefer the Ukrainian version—Odesa—given that the city has been situated inside the independent country of Ukraine since 1991 (and the Ukrainian Soviet Socialist Republic before that). I use the spelling most familiar to English readers—Odessa—a convention that masks no particular cultural agenda.

In general I have opted to use spellings that are easy on the eye when rendering foreign names or phrases in the text. The more academic versions are used in the notes and bibliography. The Russian word for a person from Odessa is
odessit
or
odessitka
, which has sometimes been rendered into English as “Odessite.” I use the more sonorous “Odessan.”

Most works of literature are quoted in their readily available English translations. Other translations from Russian, Romanian, and French, unless otherwise indicated, are my own.

nase, whose story is related in chapter 9, I would be very grateful to hear from them.

M
ark Twain felt supremely at home when he visited Odessa in the late summer of 1867. He had come to the Russian port city on the world’s first long-distance pleasure cruise, a jaunt across the Near East related in
The Innocents Abroad
. After a twenty-hour run across the Black Sea on the American steamer
Quaker City
, Twain stepped ashore to see Odessa’s cascade of stone steps—one of the most famous staircases in the world—beckoning him from the docklands to the upper city. At the top, looking like a casual visitor peering out over the harbor, the diminutive statue of the duc de Richelieu, one of the city’s early builders, held out a welcoming hand. Twain puffed his way to the heights and gazed out over the grain silos and quays below. Behind him rose the city center, buzzing with the business of trade, shipping, and exchange.

Broad, well-kept streets intersected at right angles. Low houses of two or three stories flanked the boulevards. Plain facades plastered in blues and yellows reflected the sunlight that bounced ashore from the calm waters of the Black Sea. Acacia trees lifted their branches over sidewalks that teemed with people taking in the summer air, while dust clouds roiled with each passing carriage. “Look up the street or down the street, this way or that way,” Twain wrote, “we saw only America!”
1

That was an odd way of seeing things. Twain was standing in a city that had been scouted by a Neapolitan mercenary, named by a Russian empress, governed by her one-eyed secret husband, built by two exiled French noblemen, modernized by a Cambridge-educated count, and celebrated by his wife’s Russian lover. It was one of the largest cities in Russia and the empire’s preeminent commercial port, even though it was situated closer to Vienna and Athens than to Moscow and St. Petersburg. The population was almost a quarter Jewish.

Not long after Twain’s trip, the city witnessed some of the most horrific antisemitic violence in Russian history. Jews were literally murdered in the streets in repeated outpourings of hatred and fear. Much later, in a forgotten chapter of the Holocaust, Odessa’s Jewish community—by then a third of the city’s population—was nearly destroyed by the largest wartime program of planned killing committed by a country other than Nazi Germany, in this case, Nazi-allied Romania. What Twain saw in the streets and courtyards of Odessa was a place that had cultivated, like his homeland, a remarkable ability to unite nationalities and reshape itself on its own terms, generation after generation. What he missed was the city’s tendency to tip with deadly regularity over the precipice of self-destruction.

At the time of his visit, Odessa was still developing the identity that its boosters would embrace and its detractors decry: a taste for the witty and the absurd; a veneer of Russian culture laid over a Yiddish, Greek, and Italian core; a boom-and-bust economy; a love of the dandy in men and the daring in women; a style of music and writing that involved both libertine abandon and controlled experimentation; and an approach to politics that swung wildly between the radical and the reactionary. It would eventually transfer many of those habits and values to new locales, from the jazz clubs of Leningrad to the borscht-belt banquet halls of the Catskills and Brighton Beach. In the four countries that have governed it—the Russian Empire, the Soviet Union, Romania (as an occupying power), and now Ukraine—Odessa has stood out as a mixed and rambunctious city, an island of difference perched between sea and steppe, yet a place continually threatened by its own mottled personality. “Odessa did not have any tradition, but it was therefore not afraid of new forms of living and activity,” recalled the Zionist activist and Odessa native Vladimir Jabotinsky. “It developed in us more temperament and less passion, more cynicism, but less bitterness.”
2

From its founding in 1794 all the way to the present, Odessa has struggled to survive somewhere between success and suicide. Like many vibrant seaports and multicultural urban spaces, the city has continually sought to unleash its better demons, the mischievous tricksters that are the vital muses of urban society and the restless creators of literature and art. But it has often loosed its darker ones instead, those that lurk in alleyways and whisper of religious loathing, class envy, and ethnic revenge. When things worked, Odessa nurtured intellectuals and artists whose talents lit up the world. When they didn’t, the city’s name became a byword for fanaticism, antisemitism, and deadly nationalism.

This book follows the arc of Odessa’s story from its imperial beginnings, through the punctuated tragedies of the twentieth century, to its passage into the realm of myth and longing. It traces how generations of native and adopted Odessans built a city with a uniquely incorrigible disposition, a place that became Russia’s most ambitious port and the inspiration for writers from Alexander Pushkin to Isaac Babel. It weaves together the city’s history with some of the individual lives, both well known and obscure, that made it a beloved and legendary hometown for Jews, Russians, Ukrainians, and many others.

How does a city thrive? And how does it do so in ways that give it a distinct reputation—a spirit or identity that makes denizens into local patriots? How does a piece of real estate get transformed into a way of being rather than just a place to be from? Many cities, especially ports and boomtowns—New Orleans and Naples, Las Vegas and Liverpool—have reputations that lend themselves to easy and familiar labels, but only a few become modes of living and doing. Today, it is easy to be nostalgic about the cosmopolitan idyll that Odessa has tried heroically to represent. Odessans themselves have made a profession of it. But the harder truth is that this city, like all others with some claim to greatness, disappoints as much as it inspires. The monstrous aspects of its identity have won out as often as the more noble ones, and far more than the gauzy version of its past normally allows. In the end, Odessa’s experience reveals the creative power as well as the everyday difficulty of being diverse. In the exacting art of urban flourishing, teetering between genius and devastation may be the normal state of affairs.